The MARD, on Wednesday, had a telephonic discussion with the DMER's Director on the issue of pending stipends. Doctors from Nagpur, Latur, Ambejogai have not received the payment for the past several months. The doctors allege that the government has fooled them 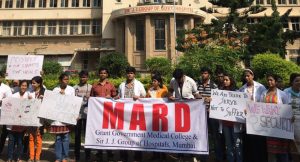 The central MARD, on April 4, issued a press release, which stated:

We have lost our patience

Ministry should release some funds from their loaded pockets we will return them, once we get our stipends

Colleges are requesting the DMER to let them sanction funds from their PLA fund, and few colleges have NO Funds to release from anywhere.

While speaking to My Medical Mantra, Dr Tatyarao Lahane, Additional Director, DMER, said, “I had a telephonic conversation with the MARD representatives. We at the DMER trying our level best to solve the stipend issue as soon as possible. The government is also trying to work out the possible options to pay the stipend.”

Dr Shailendra Satpute, General Secretary, MARD, Ambejogai Medical College, said, “We have no option left, but to go on strike. We are in the process of writing to the administration, intimating about the strike. Our future course of action will depend on the administration’s decision.”