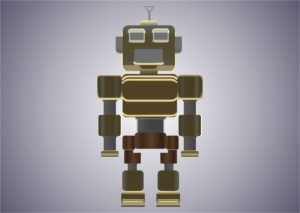 Scientists have found yet another way that Artificial Intelligence may replace humans. Stanford University researchers developed an algorithm for detecting skin cancer that’s as accurate as a diagnosis from a human dermatologist, according to the study published in the science journal Nature.

Led by graduate students in Stanford’s Artificial Intelligence Laboratory, Andre Esteva and Brett Kuprel, 130,000 images of skin lesions representing more than 2,000 different diseases were collected. A team of 21 dermatologists analyzed photos that had already been verified for biopsies and determined whether treatment was needed. One experiment tested the most common types of skin cancer while the other tested the deadliest.

Man was then challenged by machine. Using deep learning, a type of machine learning technique, Esteva and Kuprel trained an already-existing algorithm created by Google to spot cancerous moles. The results showed that the algorithm was roughly 90 percent accurate.

“We realized it was feasible, not just to do something well, but as well as a human dermatologist,” said Sebastian Thrun, an adjunct professor in the lab, in a school blog post.

According to the American Academy of Dermatology, skin cancer is the most common type of the disease, with one in five people estimated to get it in their lifetime. If detected early, it’s easy to cure, and this development could aide in swift diagnosis and treatment.

The researchers believe their findings can transition out of the lab with the the help of smartphone apps.

“Everyone will have a supercomputer in their pockets with a number of sensors in it, including a camera,” Esteva said in the blog post. “What if we could use it to visually screen for skin cancer? Or other ailments?”

It’s too early for an app store launch just yet, but the team is hopeful that with additional testing and validation, deep learning can modernize and make healthcare more accessible.